For my day job, I’m currently working in sales. I do this to make sure that my bills get paid while I pursue purpose, Today was not my best day in sales but it’s one in which I learned a valuable lesson about how counterproductive stress can be.

For context, I’ll go ahead and say that I’m in my 3rd week on the sales floor for this position. During my 1st week, I was stressed out and didn’t believe I could close anyone so…. I didn’t. 🤷🏾‍♂️

In week 2, I closed one person. I immediately started stressing out about not having more because the people who had been in my training class were way ahead of me. I started to beat myself up for not performing to the same level as everyone else. At best, this was counterproductive. At worst, it was anxiety inducing. On Friday, I had a conversation with my manager and he told me what I already knew. I was being WAY too hard on myself. I had a head knowledge of this but I was not sure how to control the stress of it all. I spent the weekend thinking about this and figuring out how I was going to be on top of my game on Monday morning.

The answer I found was simple. I remembered the words wise people I’ve known over the years and the uniform message that worrying does not fix anything. If anything, worrying will cause you to be worse off because the energy you could be placing on doing your best in every moment, is being channeled in a negative direction.

But how to apply that in the workplace?

Take every project, task, call, etc, one at a time.

I did this today and what could have been a day in which I closed 0 interactions, I was able to put points on the board by taking the job one sales call at a time. It was almost time to get off, I was exhausted & I didn’t want to be in the office anymore. I wanted to spend the rest of my shift killing time (something that is tempting for sales folks to do) but I chose, instead, to make a few more calls and give each call 100%.

The 1st caller was not interested. Nobody picked up on the 2nd. The 3rd call was one that I closed. I didn’t do anything special I the interaction. I just put forth the effort and decided that I was going to deal with each interaction with a mindset of doing the best that Bash could do. This eliminated stress because I was only focused on what I had control over. I couldn’t force the people I was interacting with to be nice to me. I couldn’t force them to be interested in what I was offering. I could, however, show up in the interaction with my game face on and exhibit excellence in my behaviors.

Thanks for stopping by,

There is a lot of blood on the hands of those who continue to spread hate speech in the name of religion.

We must do better.

It’s literally a matter of life and death.

We all want better lives BUT are we willing to make the changes needed to have better. I asked myself that question when I received 3 diagnoses that shook my world.

I’ve decided that saving my life is worth it.

Tonight I am hurting.

I am longing for what cannot be because of what I am.

I’ve counted and paid the costs time and again.

I pay it each day I don’t hear your voice. Each day you don’t acknowledge my name.

I’ll never stop hoping that someday I can make you proud.

But I cannot pretend to be that which I’m not.

Tonight I am hurting.

I am longing for what cannot be because of what I am.

I’ve counted and paid the costs time and again.

I pay it each day I don’t hear your voice. Each day you don’t acknowledge my name.

I’ll never stop hoping that someday I can make you proud.

But I cannot pretend to be that which I’m not.

It’s 2020 and yet people are still Hell bent on being pissed off at parents who love their child unconditionally. Dwayne Wade has accepted his daughter’s truth and people are bent out of shape.

I saw statuses and posts about it on various social media platforms today at my day job and tonight, with a malt beverage in hand, I’m going to address it.

Trans people have been here since the dawn of time. We have been in every civilization and the fact that your limited understanding of the trans experience is where it is, does not excuse the foolish arguments that find their way to the light each time a story like this is in the limelight.

It would take much more time than I have tonight to address all the stupid things people fix their mouths to say so I’ll address one. There is no LBGT agenda to destroy the black community. If half the folks who say shit like this KNEW their history, they would be ashamed. Black and brown people of LGBTQ+ experience have been on the frontlines for progress and movement building for generations. One of the most brilliant minds behind the African American Civil Rights Movement was a gay man.

I, for one, am glad that the world can now see what unconditional love looks like. The world can see parents loving a child and just letter her be HERSELF. I can only imagine what the world would be like if more parents would choose loving their children more than their ego and programming. Maybe the number of LGBT youth who take their own lives would drastically decline. Maybe the rate of homelessness among LGBT youth would decline. Or maybe, maybe parents who love their programming more than their children wouldn’t be missing out on relationships with amazing human beings.

But I can imagine that the next generation of LGBT youth would be better off if we could get our collective shit together and educate ourselves.

p.s. Don’t blame your bigotry on God. They made LGBT folks and have no issues with us living in our truth.

I’ve done it folks. I’ve committed to a mostly plant based diet and I’m still here to talk about it! What’s also great is, I’ve lost about 12 pounds since my last visit with my doctor. I’m nowhere near my goal weight but I’m glad to not be where I was. Here’s a summary of the journey so far:

We’re part of the way through February and I’ve been doing my best to eat well. There have been some slip-ups that I’m not proud of but, overall, I’ve managed to make a lot of good dietary decisions. For the most part, I’ve been eating a lot of vegetables and nuts. This is in keeping with the information I was given when I spoke with a dietitian at the time of my diagnosis. My energy levels have been a bit low so I think I need more calories than I’ve been consuming.

To accomplish this need for more calories, I was intentional and actually meal prepped this week. At the heart of the meal prep is red cabbage. Red cabbage is a delicious and filling way to get in a nutritious food item that pairs well with a lot of other things. I’ll be consuming a lot of green veggies and beans alongside it and hopefully, I’ll have the energy I am looking for. 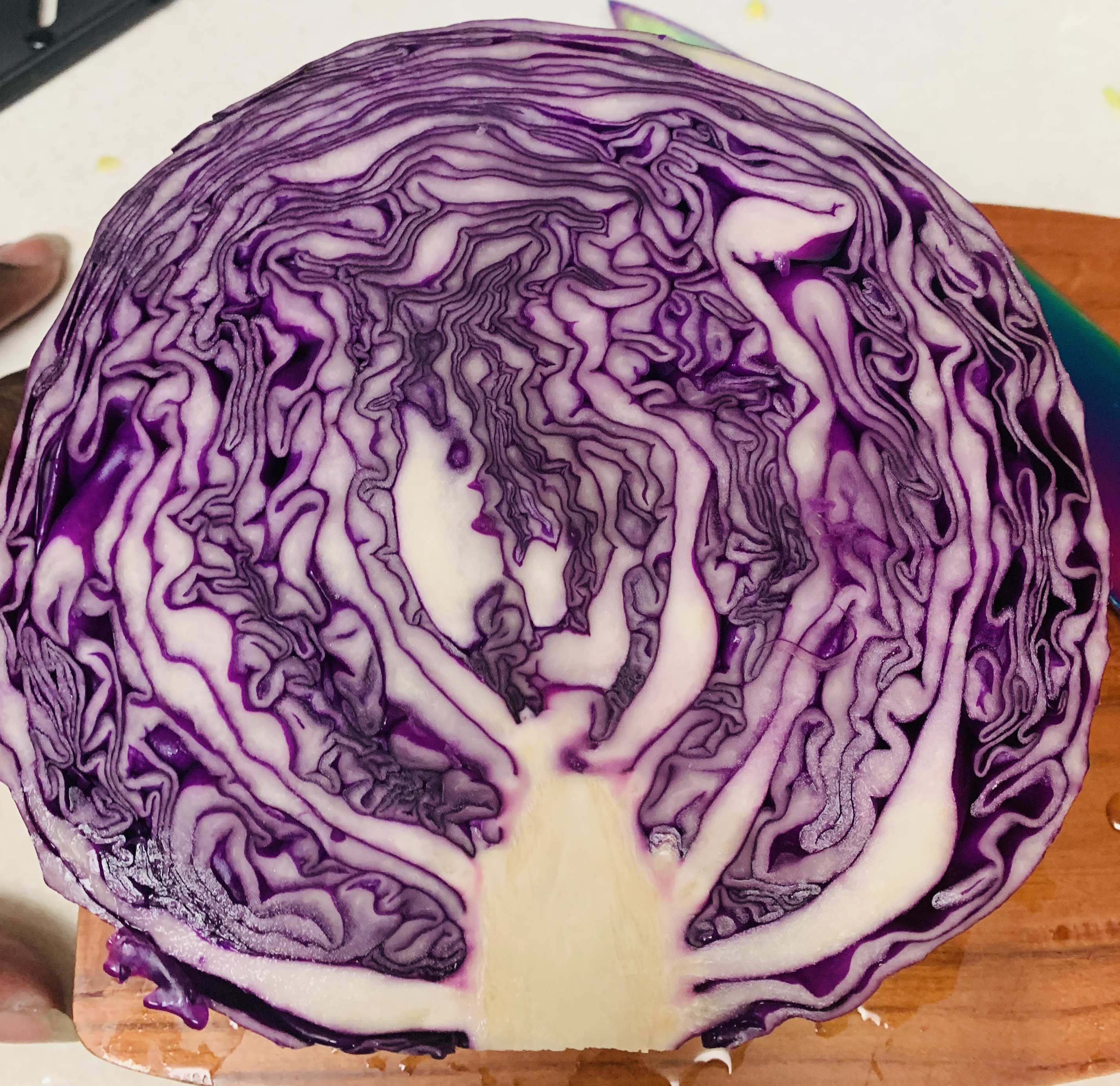